We are arguably in the midst of the second great tech bubble, and if this hypothetical bubble ever bursts people will point to Facebook for starting the inflation. No matter how you slice it, Facebook’s initial public offering was a huge deal: the IPO raised $16 billion, the third largest of any company in history. Since Facebook’s IPO in 2012 huge and growing tech deals have gone down. For comparison, in 2012 Facebook acquired Instagram for $1 billion; in 2014, Facebook acquired WhatsApp for $19 billion. To put it mildly, there’s a ton of money to be had by tech firms. As is the case with any boom, some of that money gets put into statement buildings. Today I’m going to look at a few of them and see what the architecture tells us about the company.

UPDATE 3/25: I wrote this post before I realized that DnA did a podcast on the same subject a week before. After feeling like a total ass for about 10 minutes I actually listened to it. It turns out that the podcast covers some different ground, so if you’re interested in the topic you could take in both and feel good about it. And I’m not a plagiarist! This was good news to me.

… just kidding! That’s every other Frank Gehry building. The one he designed for Facebook looks like this:

It’s a cheap joke, but it may not be very far off: Mark Zuckerberg (Facebook CEO) apparently told Frank Gehry to “tone down” his original design and make it more “anonymous”. Because when you think of toned–down anonymity, one name comes to mind: Frank Gehry. In addition to those conceptual guidelines, Zuckerberg also asked for a large open office plan. In fact, in a Facebook post Zuckerberg describes the building as “one, large open office…divided up by conference rooms and break-away spaces”. There is an obvious intent to emphasize green space and plant trees. To this end all of the parking is located underground, as well as a tunnel that connects the new campus to the old Facebook HQ.

This building speaks volumes of how Facebook thinks of itself, both explicitly and implicitly. To hear the building be described by Zuckerberg there are no interior walls, just one broad roof, much like the Facebook platform unifies everyone regardless of political or social borders. From the outside, Zuckerber says that the building “will appear as if you’re looking like a hill in nature”. In other words, the building has become a part of the environment, entwined with it in such a way that it would be difficult to imagine the landscape without it. Is it a hill or a building? That sounds a lot like Facebook’s business strategy, which is to become so ubiquitous that you can’t imagine the tech landscape without it. Is it a place to connect with friends? Or is it a place to advertise your gallery opening, or play a few games, or shop for a used bicycle? Or maybe there’s a different metaphor: in constructing their physical headquarters Facebook has taken an actual landscape and perverted it, creating a crude facsimile of what was there before, better in some ways, critically deficient in others. Is this a cynical analogy for the digital friendships that have replaced our traditional ones? I’ll leave you with that dark thought as we move next door to … 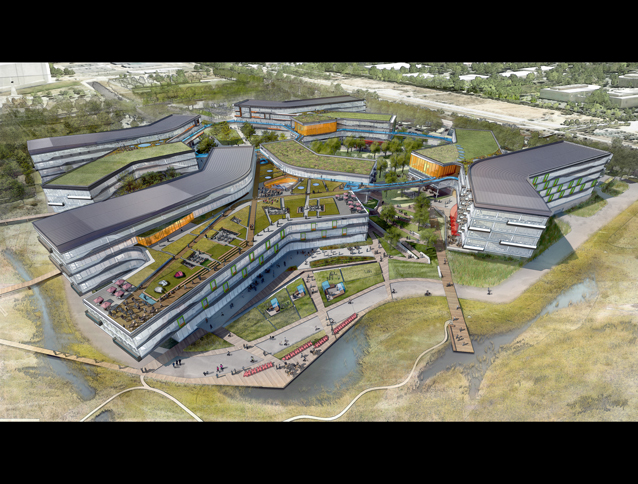 Google has long been famous in the tech field for creating a fun place to work, and most of the work Google has done from a design standpoint has been necessarily focused on the interior. To date, Google has renovated old buildings (mostly suburban industrial parks) to accommodate all the typical boring office necessities like bowling alleys and volleyball courts. After one false start (they fired the famously “green” German firm Ingenhoven before settling on the Seattle-based firm NBBJ), Google is ready to take these principles and create a new campus from the ground up.

From what little I’ve been able to find online (the above image is not only the best one I could find, it’s the only one), it sounds like Google had a pretty good idea of what they wanted. First, they wanted to project a “green” image, which is what led them to initially hire Ingenhoven. Second, they wanted proximity. Supposedly no employee is more than a two-and-a-half minute walk away from any other. How did they settle on 2.5 minutes? I don’t know and they probably wouldn’t tell me. If I were to speculate based on what I know if their search engine, Google has a proprietary algorithm that tells the architect things like the optimal disc golf course layout and how many cafes there need to be. How these data-driven design “deliverables” translated formally into bent rectangles is anyone’s guess. I will reserve final judgement on the campus until I have more than one rendering to go on, but right now I would compare it to the Gmail user interface: it probably gets the job done even if it doesn’t look great doing it.

Contrast that inward-facing data-driven approach with the Apple campus, 176 acres of brand management. Of the three campuses here, this one probably makes the clearest statement. Like the first iPod, the form of the building is alien, yet so simple you might wonder why nobody else thought of it before. You’re free to think whatever you want to think, but Apple has decided that the circle is the perfect shape for a building (and a rounded black rectangle is perfect shape for everything else).

Of course, that circle is just the part of the campus that Apple wants you to see. The inner workings, the parking and servers and nuts and bolts, all of that is underground and hidden. It’s the physical manifestation of a closed system; Apple hides all of the objectionable bits for you and leaves only the beautifully simple essence. It’s all about the projection of that image, as evidenced by the fact that there aren’t any interior renderings of the campus to be found. As ever, Apple will live and die by this closed system; just imagine what a 100,000 square foot office expansion might look like.

So there you go, three tech giants with three distinct approaches to their headquarters. Let me know your favorite or if there’s a significant HQ that I missed. One last thought on the way out: we should enjoy these case studies in architecture for tech companies while we can. If you need a reminder of how great booms in architecture also correspond with great busts, just take a look at how Great Depression took its toll on skyscrapers. The record for the tallest building in New York City was set in 1931 by the Empire State Building, beating out the Chrysler Building completed less than a year before. It wasn’t until the completion of the World Trade Center in 1972 that there was a taller building in New York. In Chicago, the Chicago Board of Trade building (completed 1930) held the local title until 1965. And in Pittsburgh the Gulf Tower (completed in 1932) was the tallest building in the city until 1970. It may be a long time before we get a better look at how a tech company defines itself through architecture at such a large scale.

Credit where it is due: lacking a solid idea for a post, I went to ArchDaily with the intent of whipping them a third time for their role in creating another kind of bubble, architectural trends. Not only did I find a different kind of inspiration for today’s post, I also came across promising post titles such as “We Need Better, Not Fewer, Buildings” and “A Theory of Architecture Part 1: Pattern Language vs Form Language”. I also found piles of the trendy fluff I’ve come to expect, so this appears to be either a small step in the right direction or a statistical blip.

One thought on “Tech Campuses: Facebook, Google and Apple”